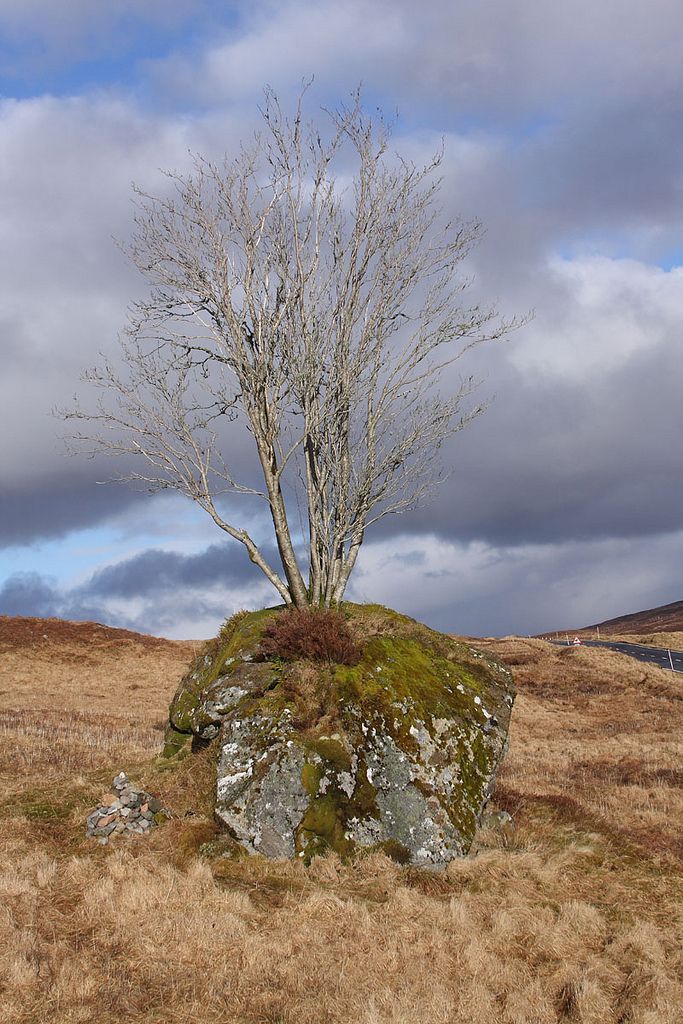 A few miles north of Bridge of Orchy, as the A82 skirts Loch Tulla and climbs steadily over the Blackmount towards Rannoch Moor and Glencoe, a lone rowan tree grows atop an enormous boulder, just a few yards from the road. It is an improbable place for a tree; its roots taking support and nourishment from the shallowest crack in a rock in the most inhospitable environment.

Yet every September, it produces an impressive harvest of berries and does so year after year, despite its exposure on a seemingly barren piece of rhyolite. In 1970, it was almost six feet high – as tall as my Dad – who climbed up the rock one day to cut a small branch to bring home to Lochgelly for our garden. Within a few years, it too was heavy with berries at the end of each summer.

Throughout my childhood, the rowan would invariably be cited in parental lessons about money. Unlike berries, money didn’t grow on trees – it had to be earned and saved before it could be spent – a mantra reinforced repeatedly over the years by my elders and politicians like Theresa May, who claimed ad nauseam, that government has no Magic Money Tree. It was her particular way of defending her policies of austerity.

It is not true.

On 8 October 2008, the then PM, Gordon Brown, announced his package to rescue the British banking system and immediately made available £400 billion to eight banks and building societies. Few asked, “Where’s the money coming from?” or, “How are we going to pay for it?” but the bankers and politicians knew the source and understood precisely how the Government was going to ‘pay’ for it.

The Government  (or currency issuer) was the source – and it was ‘paid’ for by imputing numbers into a bank account. The money was not transferred from government deposits or by raising funds through bonds, gilts or taxes: it was created out of thin air by pressing a few keys on a computer. It is that simple.

De La Rue, the printers, did not go into overdrive – nor was there hyperinflation – and the bankers were naturally delighted that the consequences of their greed and dishonesty were rewarded by the UK Government’s very own Magic Money Tree. One day, they were broke and facing penury; next morning they were celebrating with champagne, pay rises and bonuses. Quelle surprise !

‘Quantitative Easing’ was just the Bank of England buying bonds, shares and other assets in exchange for deposits made by the central bank in the commercial banking sector, by crediting their reserve accounts through a digital transaction. The purpose was to create excess reserves that could be loaned to chase a positive rate of return, which in turn would provide greater liquidity and stability. All well and good, but the ‘money’ was no more than an accounting adjustment in the respective accounts to reflect the asset exchange.

The secrecy of the global banking system and the deliberate lack of transparency in government fiscal reporting conceal the true nature of these financial exchanges and capital creation. However, due to a small group of economists and academics, a new economic paradigm has evolved that provides a greater understanding of these financial mechanisms and how they may be harnessed by governments to fund their operations and policy objectives.

Modern Monetary Theory (MMT) outlines the principles for a progressive, sustainable society which has no funding constraints. It is, in effect, the Magic Money Tree – and if used responsibly, could transform society across the planet.

At this point in history, our civilisation faces enormous challenges. Pollution of our atmosphere and oceans threaten our very existence, primarily as a result of uncontrolled population growth and all the attendant waste that humanity produces. The impact of pollutants on the climate and weather systems is well known, but the deterioration in air quality in particular poses a far more immediate and deadly threat than extreme weather and rising sea levels.

We will all have to change the way we live if humanity is to survive – and that level of readjustment, together with all the environmental restoration that is urgently required, cannot be funded sustainably (or desirably) by borrowing from the banks and markets. But for currency issuing countries like the UK, that isn’t a problem.

MMT is best explained as a macroeconomic framework that says monetarily sovereign countries like the U.S., U.K., Japan, Russia and Canada are not operationally constrained by revenues when it comes to government spending. In other words, such governments do not need taxes or borrowing for spending since they can print as much as they need and are the monopoly issuers of the currency.

“The United States can pay any debt it has because we can always print money to do that. So there is zero probability of default.”

MMT challenges conventional beliefs about the way government interacts with the economy, the nature of money, the use of taxes and the importance of budget deficits. These beliefs, in part reinforced by our well-intentioned parents and grandparents, are really no longer accurate, useful or necessary.

You may ask if that is the case, why do we have such horrific levels of poverty and homelessness in the UK? Why the cuts to public services and infrastructure if government spending is not constrained by revenues? Why do we have Universal Credit instead of a universal income? Why is Holyrood’s budget restricted? How could Gordon Brown magic up £400,000,000,000 from thin air and gift it to the wealthiest in society whilst child poverty reminiscent of Victorian times rose during his tenure of No10?

Why – if not to preserve the status quo? I suppose those responsible for these policy decisions have their reasons but at least they can count on being suitably rewarded for their loyalty once their time in office comes to an end. But at what cost to the rest of us?

Scotland, therefore, can do something quite remarkable should it choose independence. It already retains the rights to issue the Scottish pound and can legally establish its own currency issuer or central bank, through which its government can credit the commercial banks’ reserves to provide sufficient money for the economy and all its policy objectives without reliance on raising taxes, issuing bonds or borrowing from the private sector and markets.

“Too wee, too poor and too stupid”, really is no longer applicable (if it ever was).  Everything Scotland needs to be an economically sustainable, progressive sovereign country is within its grasp – providing it adopts and exploits the MMT paradigm to create its currency reserves then applies transparency and good housekeeping principles to all of its transactions.

Is there a risk? The reality is that governments across the world have been using their own Magic Money Tree to create any amount of cash for many years. The USA printed billions of dollars and shipped them out in crates to Iraq and Afghanistan to fund day-to-day military and security operations during the ‘war on terror’. The money wasn’t taken from the American people through taxation; if it is recorded anywhere; it is merely as an accounting entry on a Federal Reserve ledger.

Japan embarked on a course of fiscal stimulus, money creation and increased government spending following the asset collapse and economic crash of 1992. It runs a substantial deficit and will continue to do so but that does not constrain or limit its spending in any way whatsoever.  Its economy is stable and its citizens enjoy a high standard of living, despite the enormous impact of the tsunami and the ongoing operation to recover and isolate the nuclear corium from the Fukushima power plant.

And the UK – which has gifted some £535,000,000,000 to the commercial banks since 2008. Where did it all go? Can it all be accounted for? How much ended up off-shore in secretive banking networks? I would not like to guess but it also raises the question that if the UK Government utilised these arrangements to create over half a trillion pounds for the banks, has it done so to fund other commitments and expenditure? And what might they be for?

One of the founding proponents of MMT, Professor Bill Mitchell gave a lecture at the Labour Party Conference on the 23 September this year where he outlined the potential for sovereign nations to adequately fund the Green New Deal. I am certain a Scottish audience would be extremely receptive to his suggestions.

Scotland’s reputation for building a progressive and inclusive society was gained in no small part through the wisdom of its famous sons and daughters during the Enlightenment.  In ‘The Wealth of Nations’, Adam Smith observed:

“What improves the circumstances of the greater part can never be regarded as an inconvenience to the whole. No society can surely be flourishing and happy [when] the far greater part of the members are poor and miserable.”

Smith could never imagine a Magic Money Tree when he wrote his book in Kirkcaldy during 1775 and would probably be incredulous at the suggestion. Yet today, a few miles along the coast in North Queensferry, sits a Fifer of lesser repute who certainly knows otherwise.

Scotland has an incredible opportunity to take a completely different path with the ability to fund itself fully without impoverishing its citizens – indeed, quite the opposite. Its Magic Money Tree is in Holyrood, not atop a boulder on the Blackmount but its harvest could be just as productive and as beautiful as the rowan.

Use it responsibly. Use it now. Before it is too late.