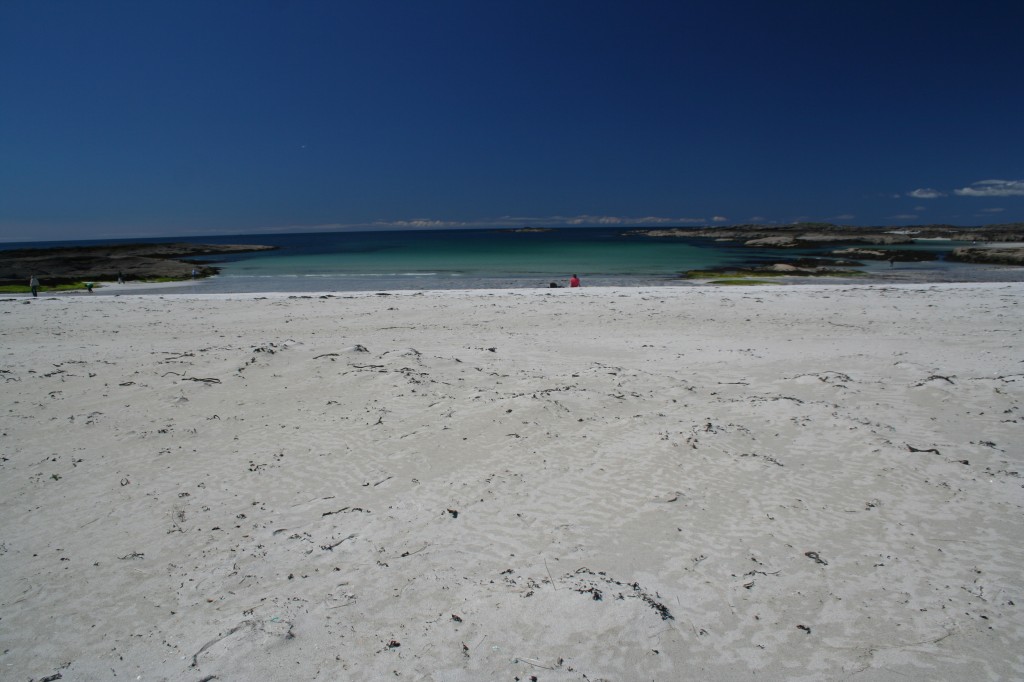 Some years ago I was working in the lovely west highlands of Scotland, based out of Fort William – looking after patients in an area that stretched from the majestic Glencoe all the way to the most westerly point in the UK – Ardamurchan and the hamlets around Kilchoan – then out to the Inner Hebrides – Eigg and Rhum. It was an idyllic time – surgeries undertaken in the most beautiful of settings – and with my walking boots and fishing gear in the back of the car, the opportunity of running up a hill or casting a fly for some wild brown trout at the end of a clinic list was often too great to miss! But sometimes – these distractions could pose a danger!

The monthly trip to Kilchoan “clinic” was by necessity, a two-day affair. Although only 70 miles or so by road, the drive, through some of the most remote areas in Britain, could take in excess of three hours – a good deal longer if the weather was fine and you had a camera packed – so on these days an overnight stay at the home of the local District Nurse and her husband was arranged. Jessie Colquhoun has run the nursing services inWest Ardnamurchanfor over thirty years – and is well-known to everyone in the community. She is the epitome of what district nursing is all about – thorough, kind, hard-working with excellent clinical skills and knowledge – so when she mentions she has a “little concern” about one of her patients that was booked in with me in the morning – you take note.

The patient in question was a retired hospital matron from my home town in Fife who had moved up to the beautiful hamlet of Sanna about two miles further down the track from Kilchoan. Well into her seventies, she had Type II diabetes and had mentioned to Jessie that she had a “little numbness” at the end of her toes for a few days and was it something to be concerned about? Jessie had remarked on this at supper that evening –with the afterthought that “it was probably her diabetes – but have a look just to be sure..”.

Diabetic neuropathy is a fairly common complication of the disease and can be transient or progressive in nature. Most people with diabetes will experience some neuropathic symptoms at one stage or another – but often these will be mild – pins and needles, slight numbness in the extremities – fingers and toes. Often patients will remark they feel as though their socks have ruffled-up under the toes, but the sensation persists even when the socks are taken off. For some people, the neuropathic symptoms are progressive and can lead to a complete lack of sensation in the hands and feet – and this is often where the real dangers lie as the sufferer will be immune to any sensation – even acute pain – and may be oblivious to any injury, such as a cut or infection, sometimes with disastrous results when another complication of the disease is present – peripheral angiopathy or poor circulation.

The following morning gave an opportunity to examine this lady but at first, she was more concerned with having her toenails cut rather than anything else! “It’s a long time between appointments” she remarked “and I can’t get down to them like I used to” – but once the formalities and necessities has been done I asked her about the symptoms that Jessie had mentioned the previous evening. “It’s about four or five days now” she said when I asked her how long the numbness had been present. “Just the big toes at first but now they’ve all gone numb and I can’t seem to wiggle them anymore!” Closer examination confirmed her observation – she was unable to detect light or sharp pressure and indeed she was unable to move any of her toes. “It feels like my feet have gone really stiff all of a sudden, even my ankles feel stiff. Ah, it’s probably just old age or my diabetes or both!” she added as an afterthought.

But something just didn’t feel right with her. With diabetic neuropathy – sensory loss is usually a slow process and sometimes one can even find a heightened sensory picture in the initial stages. What was present here was a complete absence of sensation – and coupled with the loss of motor control – the ability to move her toes and all within a short period of time, gave a very unusual clinical presentation.

“How have you been keeping?” I asked her. “Oh fine” she replied. I don’t take anything for my diabetes – just watch what I eat. Apart from a nasty wee flu-ey like virus a couple of months ago – I’ve been in the pink for as long as I can remember!”

And therein lay the clue.

As with many medical complaints – the inception or aetiological factors of disease often take place many months – or years – before the first symptoms appear – and often they can seem unrelated.

Guillain–Barré syndrome is an acute polyneuropathy, a disorder affecting the peripheral nervous system. Ascending paralysis, weakness beginning in the feet and hands and migrating towards the trunk, is the most typical symptom, and some subtypes cause change in sensation or pain as well as dysfunction of the autonomic nervous system. It can cause life-threatening complications, in particular if the breathing muscles are affected or if there is autonomic nervous system involvement. The disease is usually triggered by an infection, sometimes months before the symptoms present.

The diagnosis is usually made by nerve conduction studies and with studies of the cerebrospinal fluid. With prompt treatment by intravenous immunoglobulins or plasmapheresis, together with supportive care, the majority will recover completely. However, in the remote and rural environment of the west highlands of Scotland – diagnostic tests and treatment are not readily at hand – and the decision to refer for investigation and treatment is the responsibility of the local clinicians – the district nurse or GP – or, in this case, the visiting podiatrist. Providing they recognise and identify the symptoms correctly!

Perhaps a little nervously, I explained my hesitation in agreeing with her assertion that it was her diabetes or merely an inconvenience of age. I suggested that I speak to her General Practitioner and ask his opinion and I would call her once I had done so. Tat afternoon, I placed a call to her GP – some thirty miles away in Acharacle – and relayed my concerns. “Aye, it could very well be – but it’s your call” he added helpfully. “We’ll have to call the air ambulance and get her flown down to the Western inGlasgowif you’re certain that’s what it is…” he added as an afterthought.

At times like these, one is grateful that, in some areas of medical care, the patient rather than profit is paramount – and the burden of cost is with the provider. I called my patient and told her to pack an overnight bag – before I returned to my digs in Fort William and pondered, nervously, what the number-crunchers in the NHS would say when they found out what I had cost them in air freight! Three days later, during lunch, I received a call from Jessie Colquhoun in Kilhoan. “Aye you were right enough to be suspicious – it’s Guillain–Barré “ she said. “Looks like she’ll be in the Western for a few weeks though – but the consultant says she has a good chance of recovery. Maybe we’ll see her home before your next trip out…”

Ten years later I called into Jessie whilst on holiday in Scotland and she remarked on the case and I was delighted to hear that our lady was still living the life in Sanna – none the worse for her experience. I had been lucky. And fortunate enough to remember the subject when it had been taught during my time at podiatry school a decade previously. Some colleagues in podiatry and other professions consider basic tasks – nail cutting and personal nursing, for example – to be inappropriate jobs for the highly trained professional – and could and should be delegated to carers with fairly basic training in the necessary skills. But the real skill is looking beyond the obvious and presenting needs and being able and proficient in diagnosing those conditions that are not too apparent and very often, not what the patient comes for in the first place.

I mention all of this as once again I hear from a colleague that the NHS is embarking on a new round of discharging patients from their caseloads in an attempt to cut waiting times again – on the grounds that they don’t meet the necessary (and revised) eligibility criteria and have a pre-existing condition such as diabetes or severe vascular disease. If you do, then that’s ok – you might see an NHS podiatrist in around eight months if you meet the revised eligibility criteria. If you don’t and you have a minor foot problem – such as a difficulty getting down to cut your toenails – then you will probably be offered the services of a volunteer from AGE UK who will visit you in your home (for a small charge) to attend to your needs. Which is fine. Providing you have the obvious! Either that you or you are at the mercy of the largely unregulated private sector (of which more later) whether you can afford the fees or not….

2 comments on “Meeting the Needs?”