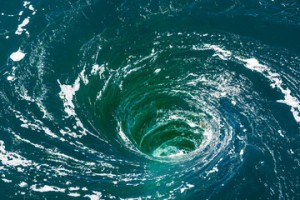 I used to dream a lot when I was young. Every night without fail. It was like falling backwards into a rushing tunnel or whirlpool and feeling completely disorientated and lost until everything, eventually made some kind of sense. Waking up was much the same – but gentler – and often there was a desire to drift back into the maelstrom as it somehow made more sense than the reality beyond closed eyes.

It provided comfort somehow. But I never discovered how or why.

I used to sleepwalk too. That was the dangerous bit in my nocturnal habits and probably the reason why smoking dope was so attractive when I grew up. I don’t dream when I have a smoke – or if I do it’s probably at a deeper and safer level. I’ve not fallen out any windows of late, but maybe that’s a missed opportunity now. But that whirlpool is still there.

I had one dream, when I was maybe seven years old where I woke up in my attic bedroom one morning and went downstairs to find an empty house.. My mum, dad and sister had disappeared and when I walked up the hill towards the school, I noticed that all the other houses were empty too. All the doors were open but the there was silence and nothing moved inside or out.

It wasn’t strange or disturbing. I could go inside any house and root around and nobody bothered me – and when I arrived at school, it was empty too. It was simply curious. And for months afterwards, I’d go to bed and think about the dream and when I fell into the tunnel or whirlpool again, I’d be away on another solitary adventure – flying airplanes, rooting through palaces and mansions, sailing boats.

Having an exciting time. Just on my own.

Then one night I dreamt about something else and that was it. I never went back again and it the experience became nothing more than a memory. It ceased to be real. Until now.

Perhaps we are all just tired and need a good sleep and we’re in that disjointed state where nothing makes sense and everything engulfs and sweeps away. But I feel we should take comfort – at least I do – in that it really is a good place; somewhere that all of us know as “home” and feel part of something really big and overwhelming once again. Somewhere amazing enough to make you throw yourself out windows in a different dimension and don’t break any bones when you hit the floor.

It serves much more than a selfish purpose to reflect and remember these times, where things are simple and straightforward and makes sense. Our childhood is there for good reason. Remember it carefully and fondly in the days ahead.